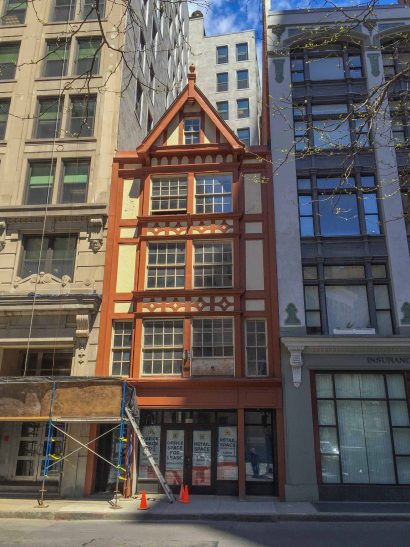 170 years ago, 150 State Street was waterfront property. The address would have been located on a thriving wharf where sailing ships loaded and unloaded cargo on a long pier and merchants, tradesmen, and shoppers bustled about a lively market. Today, 150 State Street is on solid ground in the middle of Boston’s Financial District. Wood reclaimed from this building is about as ‘Boston’ as it gets.

In 1630, many of the first Puritan settlers to Boston – including John Winthrop – built their homes along State Street. Although the road has changed names many times since, the area has remained a center of activity – even as it transformed from a residential neighborhood into a commercial area and then into a financial district. At the head of State Street was the Old State House, where the Boston Massacre took place on March 5 in 1770. At the other end, on the waterfront, was the Bunch of Grapes Tavern, where both Paul Revere and George Washington dined. 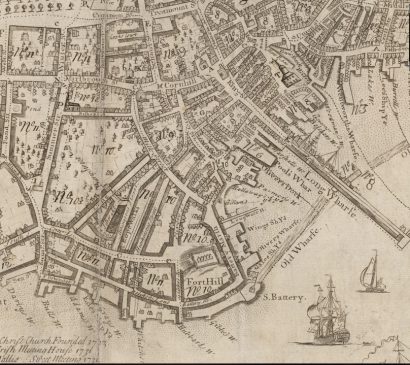 Emanating from the shore were numerous piers, the longest being Long Wharf. Built between 1710 and 1721, it was 54 feet wide and ran almost 1,600 feet in length. This allowed larger ships to dock and be unloaded directly onto the pier, which was lined with shops and warehouses. As a child, American painter John Singleton Copley played on this wharf by his mother’s tobacco shop, merchant John Hancock had his counting house here, and the fictitious Johnny Tremain knew the area like the back of his bad hand.

As the harbor prospered, demand increased for additional buildable land, and the waterfront was gradually extended with fill. After the Civil War, Boston’s international trade sector declined, and thus also the importance of Long Wharf. From 1868 to 1874, Atlantic Avenue was constructed through the city across several wharves, including Long Wharf. Any open water trapped inland of this new road was completely filled for new construction. 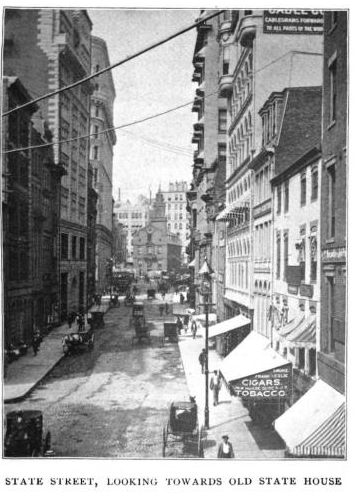 So begins the history of 150 State Street. Built in 1899 on this new land, the building is a 4,576 square foot freestanding wood-frame construction. The five-story English Tudor-style exterior, complete with steeply pitched roof, is unusual for the street and stands out visually from the remainder of the block. While researching past businesses at the 150 State Street address, we found early 1900s retailers Beale Press, book seller, and the Chas. C. Hutchinson Nautical Instruments Company, which sold nautical and surveying instruments, charts, and other marine equipment. The Elizabethan façade was added in 1911, when 150 State Street was home to the English consulate.

After the building was sold to new owners in August of 2015, renovations began on the interior. We were fortunate to obtain original structural timbers during the renovation: 14″ x 14″ x 20′ hand-hewn white pine beams. The fact that many of the beams were hand-hewn, and not sawn, is somewhat unusual for a building of this age. The reclaimed timbers have a deep-toned pumpkin color and are likely destined for use as a wide plank Pumpkin Pine floor. Before moulding into flooring, the wood will be de-nailed, sawn, and kiln-dried.

After renovations, 150 State Street will live on in yet another incarnation. Recent building permits and blog postings suggest that a new restaurant is planned for the first and second floors and a roof deck with office space will be added elsewhere.