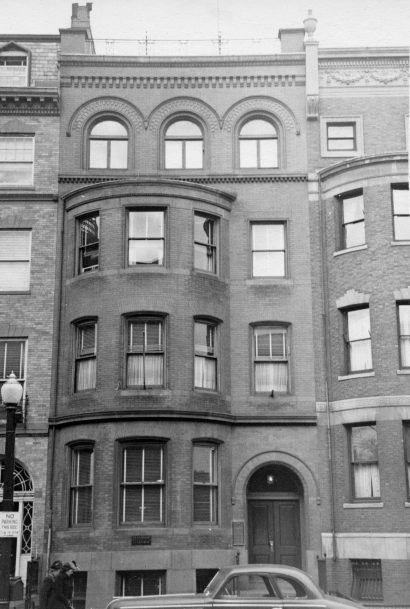 The four-story Back Bay brick home was designed by Fehmer & Page architects, who were also responsible for five other Beacon Street homes and one of Boston’s first steel-framed buildings. The stately brownstone features curved bay windows and some basement exposure to the street above. Arches are a façade theme that play out in both fourth-story windows and the front entryway. The building has been cataloged by legendary local architectural historian Bainbridge Bunting. 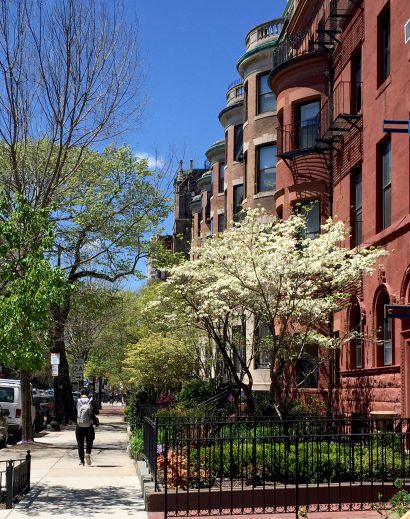 onstruction on 474 Beacon was completed in 1891 for merchant Nathaniel Willard Pierce and his wife Catherine Hatch Pierce. The Pierces’ daughter, Katharine, owned the home for many years after her parents passed away, renting to notable Bostonians, including the families of Nathaniel Cotton (another merchant) and Charles Foster (director and treasurer of Chickering & Sons piano manufacturer and superintendent at the Boston Sugar Refinery). The Fosters took up residence at 474 Beacon partially due to a need to better entertain for their daughter’s debutante season. The family of James T. Barron, who operated a cannery in Portland, Oregon, also enjoyed the Boston social scene in this home during their daughter’s coming-of-age season. We imagine the parlor was no stranger to late-night parties during these years.

In 1916, 474 Beacon Street was sold to the Hart family. Next, after 22 years of Hart residents, 474 Beacon became home to Dr. Moses Strock and his wife, who converted the building into apartments and medical offices, in which Dr. Strock and his brother Alvin maintained their oral surgery and dental practices.

In 1960, the building was converted to a nine-apartment complex. Today, renovations are underway on these nine units, readying them for occupancy as luxury apartments with views of the Charles River. 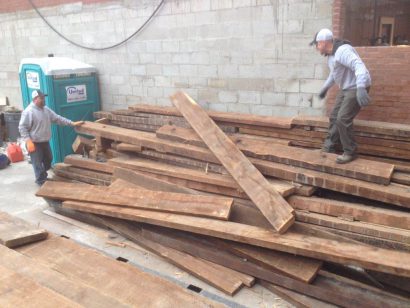 During the gut-rehab of the building, wooden joists of unpainted Heart Pine were discovered and salvaged for re-use. The species of wood was a fun find, as the majority of late 19th-century Boston buildings were constructed with spruce or fir joists. These Heart Pine joists bear the historic stamp of George McQuesten’s legendary Geo. McQuesten Lumber company, a large East Boston-based importer and distributer of home and shipbuilding timber. The quality of the Heart Pine is superb and will make for fine skip-planed flooring, paneling, or countertops.

The building remains historically connected to the Museum of Fine Arts through Katharine Pierce, daughter of the original owners. When Katharine died in March of 1913 in Algiers, her 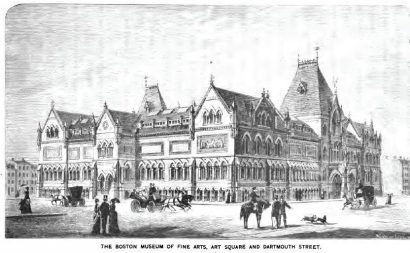 death was announced in the Boston Evening Transcript, quickly making it known that “thousands [had been] left” in her will for various local organizations. In 2016 dollars, Katharine had willed approximately $2,800,000.00, with a matching amount of private bequests and some annuities. The Boston Museum of Fine Art was the largest beneficiary (it received approximately $1.2 million in 2016 dollars), closely followed by other entities with missions to better the lives those in the greatest need – especially women and children. One hundred years later, the Katharine C. Pierce Trust continues to annually provides funding for “needy and deserving gentlewomen” of Massachusetts, with preference shown for the elderly. In 2014, the figure for grants given by the Trust was just under $250,000.00.