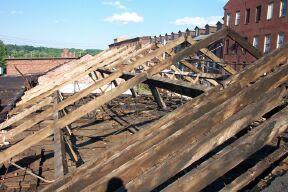 In 1865, the thread manufacturing firm Merrick, Bro. & Co. moved their operations from Connecticut to Holyoke, Massachusetts. This location afforded water-power that would allow them to enlarge their business and manufacture a higher quality of six-cord thread used at that time by sewing machines. Soon after their relocation, they changed their corporate name to The Merrick Thread Company. In 1866, they completed their first manufacturing structure, which would utilize power generated by the Holyoke Water-Power Company along the canal. A year later, 200 employees began production of spool cotton. The years that followed brought financial growth and the expansion into additional building space in the mill complex. 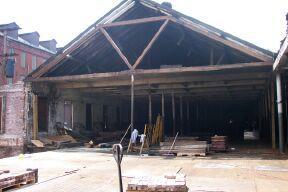 In 1898, the British-owned English Sewing Company purchased and merged 13 independent thread and yarn companies, including The Merrick Thread Company of Holyoke, forming the American Thread Company. As the years progressed, American Thread employed various immigrant groups in mills scattered from Connecticut to Maine. Working conditions in the mills were hard: cold in the winter and hot in the summer, with long work days of 12 to 14 hours in a dusty and loud environment. Children were often employed because they could be paid less for their labor, and child labor laws were often ignored. 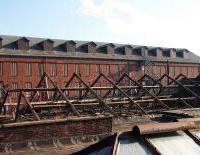 At the time of its formation, the American Thread Company was the largest thread company in the world, and it remained a successful business throughout the 20th century, finally leaving New England and relocating to North Carolina in 1985.

One of the buildings built by Merrick thread in the 1880s was taken down in 2003. Material, including wood of several species, was salvaged for re-milling or to be used "as-is" in other structures. We were excited to be able to make available several varieties of timber from this building.

The white pine rafters and roof decking of this structure were, over time, slowly cooked in the heat, turning a deep rich tone ranging from honey sienna to chocolate umber. The grade of the material used was quite high and we yielded beautiful, long flooring from this stock. Knot content was low, and the widths ranged from 4" to 6.5", with most at 6". Wider white pine boards, up to 13" in width, were milled from other beams in the structure. 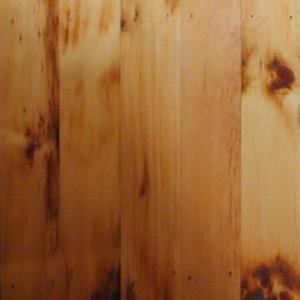 Amazingly, many of the first floor joists of this warehouse were 10" x 14" chestnut beams. Due to the large size of these pieces, we were able to resaw a wide variety of dimensional lumber.

Finally, much of the building was framed with Heart Pine - our particular favorite - of varying dimension. The Heart Pine, which dated back to the 1880s, was high-grade material, as was all of the reclaimed American Thread lumber. This stock was choice.