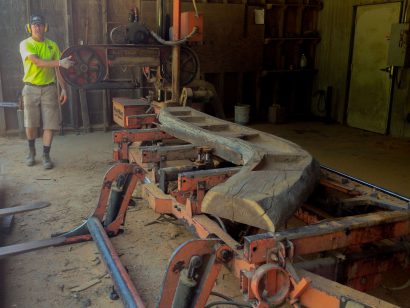 189 Winnisimmet Street once housed the Post Office and Odd Fellows Home in Chelsea, Massachusetts. Built in 1906, it was one of the few buildings in the area to survive the great Chelsea Fire of 1908, which burned 350 acres and left 15,000 people homeless. Today, 189 Winnisimmet is home to the Chelsea Theater Works and the Apollinaire Theatre Company, a year-round, award-winning professional theater. On the first floor of the building are the newly opened BlackBox and Children’s Theaters.The second floor is used for rehearsal, and the top story contains a 100-seat performance space. The Apollinaire, as it is affectionately known, is a product of tremendous community involvement and is a newfound social anchor in Chelsea Square. 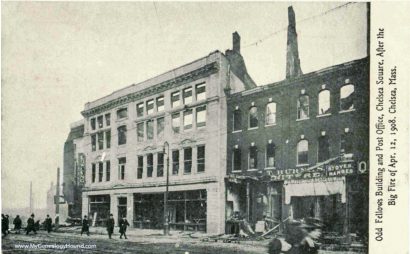 Just outside the BlackBox doors is a small and irregularly-shaped reception area, where Apollinaire owner Danielle Fauteux Jacques was challenged to incorporate a bar without dominating the room. The original architect’s rendering called for a conventional bartop, which would make a few ‘zigs and zags’ to conform to the space. When approached to produce the bar, Longleaf Lumber recognized the opportunity to employ the natural curves of salvaged live oak (Quercus virginiana) timbers. Jacques jumped at the opportunity to use this special wood, partially because of the proximity of the live oak reclamation project (the beams were salvaged from Charlestown Navy Yard, a stone’s throw from Chelsea) to the Apollinaire’s 189 Winnisimmet location.

To craft the bar, Longleaf sawyers began by sawing 14” thick angled pieces of antique live oak into 5” (20/4″!) slabs. The resulting pieces were then planned to be spooned side-by-side (with resin filler) to create the bar’s width. 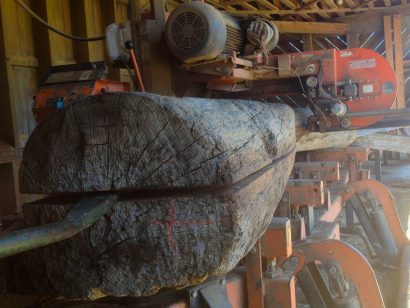 Because live oak is such a dense and heavy wood, a chainsaw was used to remove material and create pockets of space on the bottom of the bartop, thus reducing the weight and making transport easier. After the team at our mill in Berwick, Maine laid out the prepared live oak slabs, they built the bar die wall, which supports the live oak bartop’s weight and houses bar equipment. 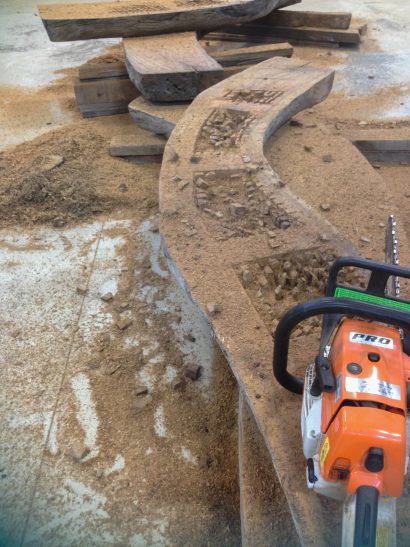 removing wood from the back of the bartops to reduce weight

As a design feature, a gap was left between the slabs and bridged with a cobalt blue 3form resin product called “Chroma”. The Chroma product comes in sheets and was cut into the serpentine shape that ‘flows’ between the live oak slabs. Color-changing LED lights are mounted under the resin for a mystical effect. The 3form “Chroma” resin was chosen collaboratively for several reasons: it is available in a range of colors; is eco-friendly (made from 38% recycled acrylic content), can be renewed by re-sanding, and works in concert with the LED light detail in the ‘chasm’. 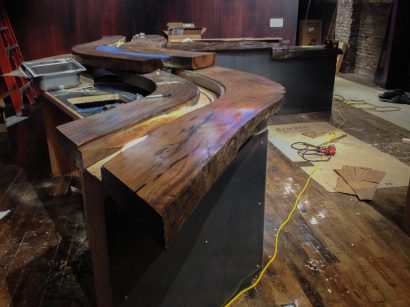 Bartop construction was initially conducted at our mill in Berwick, Maine, to test for quality of fit. The live oak pieces were given a few introductory coats of Waterlox tung oil and were then mounted onto custom steel trestles that cantilever over the front side of the bar. Next, the bar face was clad with Corten steel to stiffen the structure. After five months of slow-moving fabrication, the bar was broken down into components and shipped to Chelsea. Once installed at The Apollinaire, the live oak was given several additional coats of Waterlox tung oil.

The support of individuals, local business owners, the City of Chelsea, and MassDevelopment grant money received by Jacques in 2016 made construction of the now-rentable BlackBox possible. Tremendous community benefit has resulted from this investment, not the least of which is an additional space for regional theater groups to perform and rehearse.

Opening night for the new BlackBox Theater was held in November of 2016 and shows are ongoing. When you visit their next show, be sure to grab a drink at Chelsea’s first “custom mixed-media reclaimed live oak wood bar”! 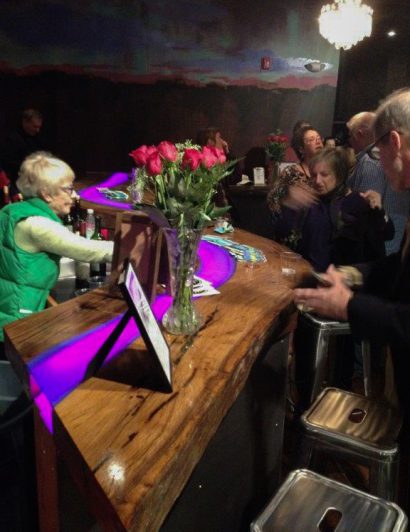 Additional Photographs of the Fabrication Process 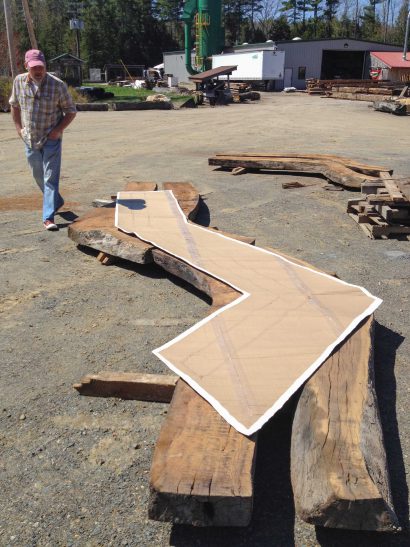 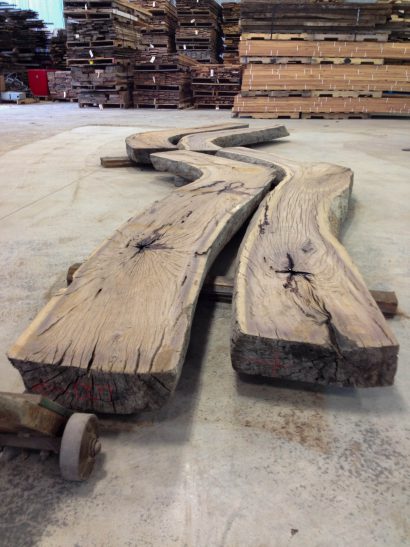 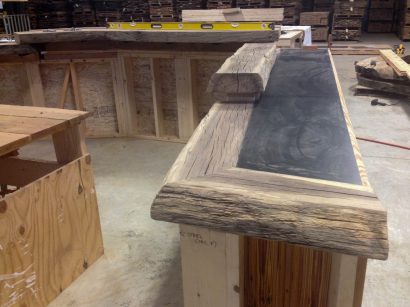 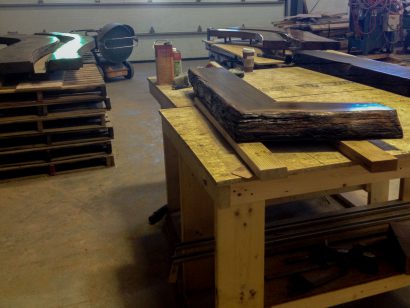 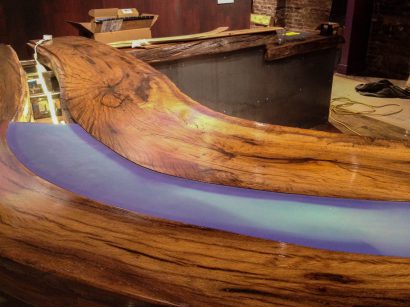 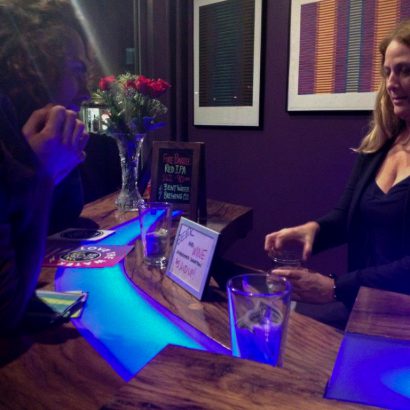 The historic postcard photo used on this page is provided by My Genealogy Hound.