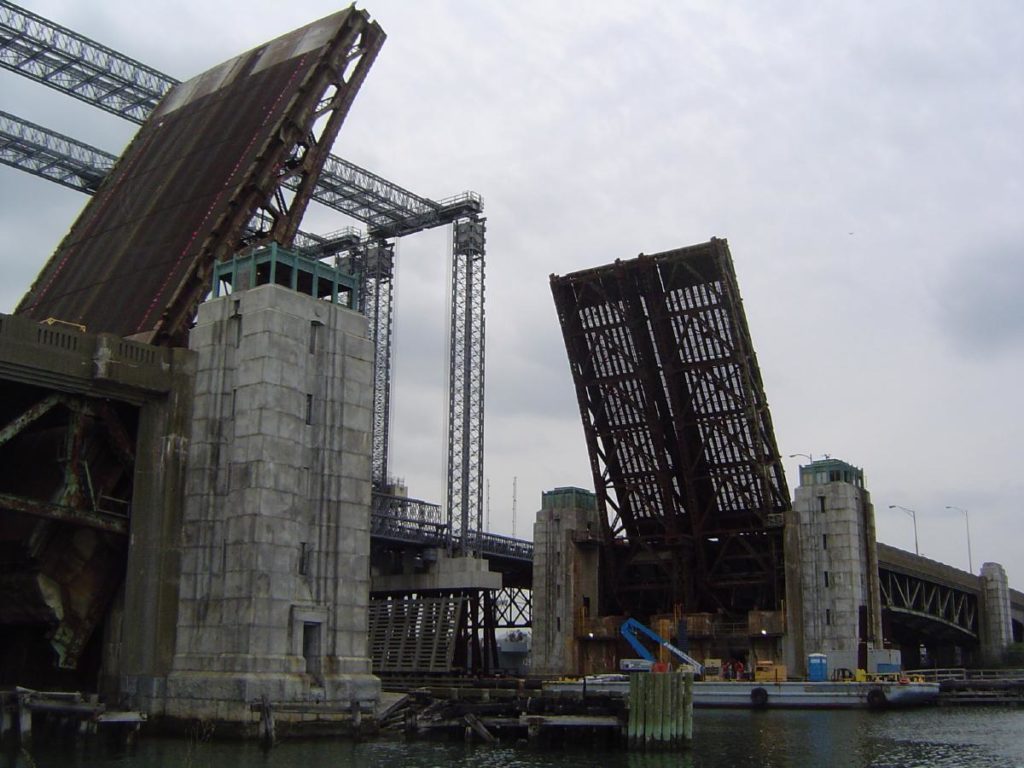 At one point the second-largest shipbuilding facility in the United States, the Fore River Shipyard employed tens of thousands of workers, produced hundreds of ships, and may have been the origin of the famous ‘Kilroy Was Here’ tag. In 2017, one of the last original buildings at the yard was demolished, yielding old-growth longleaf pine that will make fantastic flooring, paneling, or tabletops. 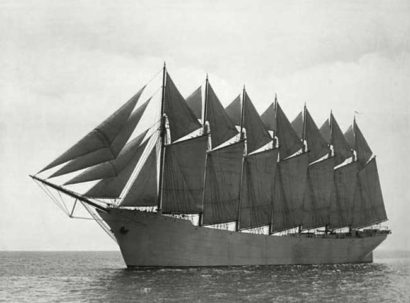 In 1883, Alexander Graham Bell’s assistant, Thomas Watson, co-founded the Fore River Ship & Engine Company. When the company outgrew its original Braintree location, they floated several of their buildings – including the machine shop and a four-story office – downriver to Quincy Point. In 1902, this brand new shipyard launched the Thomas W. Lawson, which, at 403 feet and with 25 sails, was the largest pure sailing ship ever built. In the years that followed, the yard built torpedo boat destroyers, submarines, battleships, ferries, steamers, freighters, and fishing trawlers. 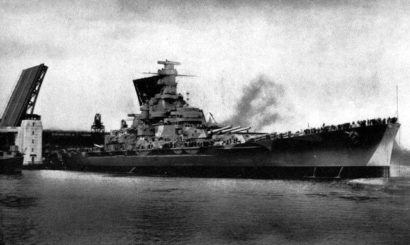 In 1913, the yard was purchased by Bethlehem Steel. With ships in demand for World War I, the yard immediately expanded, with a steel mill being the most important improvement. During the war, 15,000 workers were employed there, including Joe P. Kennedy, and the yard grew to over 80 buildings. Ship production was swift. After World War I, as The Great Depression struck, employment at the Fore River Shipyard dropped to only 812 employees. That changed as World War II ramped up, driving new waves of hiring at the shipyard. 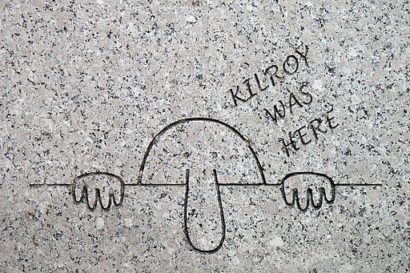 American GIs carried the graffiti tag “Kilroy was here” throughout the world during World War II. Although its true origin remains a mystery, one of the most plausible explanations implicates James J. Kilroy, of Boston. In 1941, Kilroy was employed by the Fore River Shipyard counting rivet holes so that riveters’ work could be calculated. To discourage dishonesty, he began scrawling his signature “Kilroy was here” to prevent unscrupulous tampering of his work. Several vessels produced at the yard bore his mark. 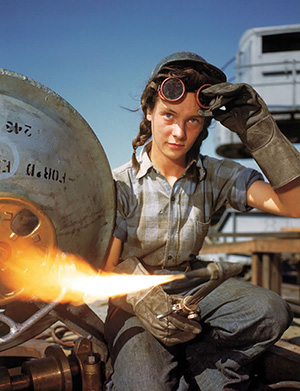 During the Second World War, the Fore River Shipyard peaked at 32,000 workers, including 1,200 women. “Winnie the Welder” was the nickname given to the female shipbuilders who worked as supervisors, welders, crane operators, nurses, and cafeteria workers. They worked alongside their male counterparts, helping to set ship-building records with dedication and determination. One of the most famous of these “Winnies” was Florence “Woo Woo” DiTullio Joyce who, at only eighteen, was employed as the first female shipbuilder at Fore River; the genesis of her nickname was the catcalls directed her way.

After World War II, shipbuilding slowed again. By the mid 1950s, large tankers had become the yard’s main work and the first refrigerated liquid chemical transport ship was completed. The Navy’s orders for frigates, one of which was the first nuclear powered ship, and for the first nuclear guided-missile cruiser in 1957 helped keep the yard working. Unrelenting financial pressure, however, forced Bethlehem Steel to put the yard up for sale in 1963.

Within one year, General Dynamics had purchased the 180 acre yard for $5 million. The new owners reduced the payroll from 1,800 workers to 500 and made improvements. Over the next decades, high labor costs and older facilities had made operating the yard unprofitable, however. General Dynamics closed the Fore River Shipyard in 1986.

When the yard finally closed in 1986, it had employed tens of thousands of workers, produced hundreds of ships, and helped the United States win two world wars.

After a brief attempt at a ship scrapping business on the Fore River site failed in 1994, the yard was purchased by Mass Heavy Industries, with the help of a $55 million loan from the U.S. Maritime Administration (MARAD). The economic viability of the project, however, was flawed, and MHI defaulted only a few years later in 2000. 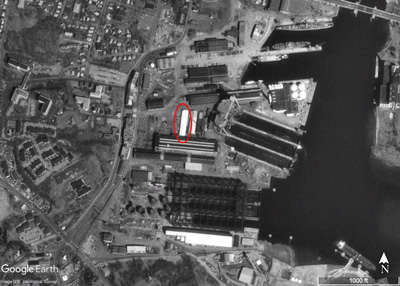 By 2004, Daniel Quirk was the owner of the Fore River Shipyard. Today, two-thirds of the yard is still in Quincy, with the remaining one-third in Braintree. In 2017, as a part of Mr. Quirk’s plans for the site, one of the last original buildings was dismantled and the structural heart pine timbers saved. We haven’t been able to pinpoint the exact date of the building’s construction, but the construction style of the 27,000 square foot structure was certainly late 19th century, and we have been told that it was one of the yard’s oldest. We suspect, however, that it was built between 1913 and the early 1940s, given its presence on site plans dated to the end of World War II. At one point, the building had been used as a forge. Later, the back part of the building was the location of the Bethlehem Steel Welding School and the front part the location of the yard fire department. Immediately prior to its dismantling it was used by the Quincy Fire Department as a Fire Training Academy. During the dismantling of the building, Longleaf was able to procure very dense-grain heart pine beams that were salvaged in the form of 6″ x 14″ x 36′ joists, 12″ x 12″ x 35′ posts, and 35′ long carriers. These reclaimed heart pine beams will be sawn, kiln-dried, and finished into flooring, paneling and other reclaimed wood millwork. 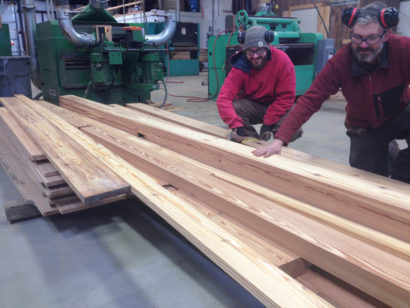 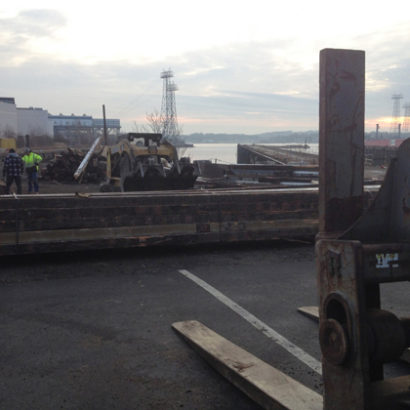 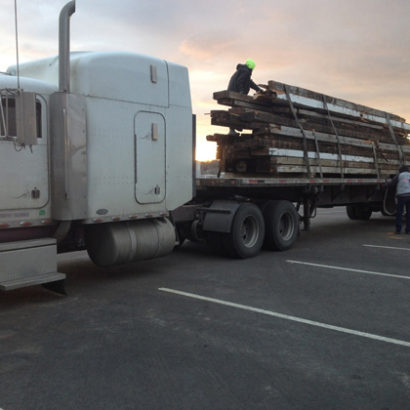 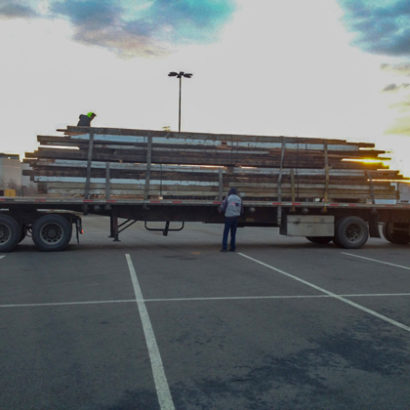 For more information on the Fore River Shipyard, we recommend reading: “A History of Shipbuilding at Fore River” by Anthony F. Sarcone and Lawrence S. Rines.