The first-ever Massachusetts tornado to be recorded in February destroyed this 19th-century Conway barn. Although most of the barn’s structural timbers were destroyed, we were able to salvage the two-inch thick reclaimed American chestnut decking and structural floor joists. We’re sad that the barn was destroyed but we’re excited that some of its antique wood will be recycled. 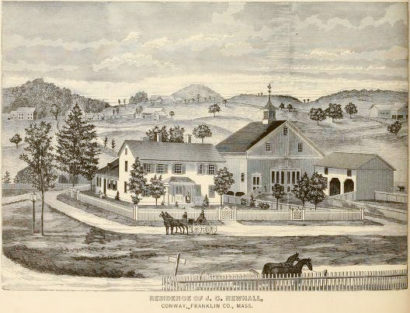 The history of this barn dates to the 1700s, when generations of the Newhall family lived on this Pumpkin Hollow property. The land is located near the center of the town of Conway, which lies just west of the Connecticut River in Western Massachusetts. Colonel Jabez Newhall ran a tavern for over 45 years on the land, and his descendants later moved into the tavern building, operating the surrounding property as a dairy farm and tobacco field, utilizing a large red barn adjacent to the house. By the mid-1900s, after generations of hard use, both the house and barn had settled into a state of deep neglect. In 1985, Jan and John Maggs purchased the barn, house, and land. They began a significant renovation of the buildings, converting the barn into a storage space for restored furniture owned by their business, J&J Maggs Antiques.

On the evening of February 25th, 2017, storms were predicted for Conway and Pumpkin Hollow. The Maggs – just home from a trip to Boston – had decided not to work in the barn that evening, opting instead for a drink in their home. Shortly after sitting down, the wind picked up and an incredible noise ripped through the hollow. John, who was concerned, opened the door to look outside, only to have it ripped out of his hands and off its hinges. He recalls almost being sucked out the doorway. After just one minute, the turbulence outside was over, and the barn was completely gone. The unpredicted tornado had picked the five-story structure up off its deck and dropped most of it back down in a crumpled heap, while strewing a portion of the structure and its contents across the nearby field and wetland.

The EF-1 tornado had first touched down in Goshen, lifted up for several miles, and then landed again in Conway, producing a five-mile-long ground strike with a width of 50 to 200 yards. The twister damaged more than a dozen houses, one church, hundreds of trees, and the antique barn. All of this took place in fewer than eight minutes, as windspeed reached up to 110 miles per hour. Although town buildings suffered significant damage, only one minor injury was reported. The close community pulled together immediately. Donations were made to rebuild, and the Franklin Land Trust organized a volunteer cleanup event where 40 volunteers cleaned debris from hayfields and wetlands.

After unsalvageable broken lumber was cleared, only the wooden deck of the old barn remained. Longleaf Lumber was lucky to salvage the 2″ thick American chestnut decking from the barn’s platform, as well as the structural floor joists. American chestnut, which has been blighted to near extinction, is a fantastic reclaimed wood with great strength, a light weight, and excellent stability. The lumber will be trucked to our mill in Berwick, Maine, where it is sawn and then kiln-dried to remove moisture and exterminate any insects living in the wood.

The two-inch thickness of the decking means it will make fantastic reclaimed wood countertop or table material, with either a bright-planed or a skip-planed surface. Keep in touch with us by signing up for our e-mail list or following our social media accounts, and we’ll post updates on the ‘tornado barn wood’! 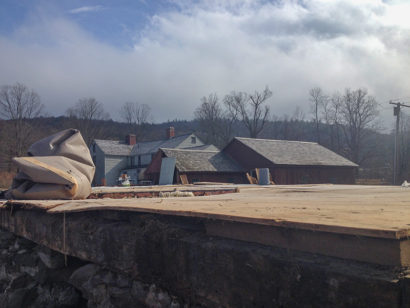 Top image of the Maggs’ barn before the tornado is courtesy The Republican, Springfield, Massachusetts.

Image of the Newhall home and barn from “History of the Connecticut River Valley in Massachusetts” published in 1879.