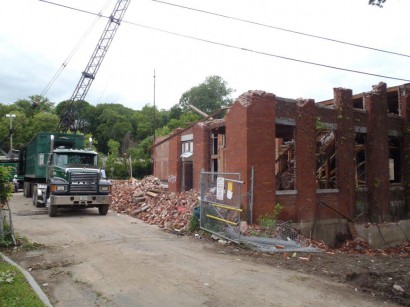 The uptown Applebee’s has reset precedents for the sustainability of area restaurants by going above and beyond traditional green standards. Besides sourcing reclaimed Southern Yellow Pine from Longleaf Lumber, they’ve also installed a rooftop rainwater harvesting system, a ‘living wall’, waterless urinals, and a host of other sustainable features.

The restaurant’s reclaimed wood was sourced from a warehouse in Springfield, Massachusetts that had long since outlived its usefulness, and had been recently slated for demolition. The Springfield Extract building was originally constructed with old growth Southern Yellow Pine structural timbers and decking. Apple-Metro Inc. used this virgin growth lumber to built out parts of the restaurant, in which reclaimed wood played a strong aesthetic and thematic role as a responsible building material.

Applebee’s commitment to environmental sustainability is a strong step in a responsible direction for restaurant chains. By sourcing reclaimed wood, they’ve made a real commitment to a future where conserving standing timber will play more and more of a role as a renewable resource and critically important carbon sink.