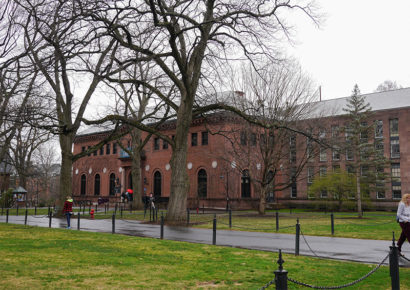 The Smith College community is looking forward to the renovated and expanded Neilson Library, which is expected to be complete and open this fall semester. During the renovation process, Longleaf Lumber salvaged Heart Pine beams from the core of the historic 1909 library and will be sharing the history of this beloved structure through recycled and re-milled flooring, paneling, and other millwork. 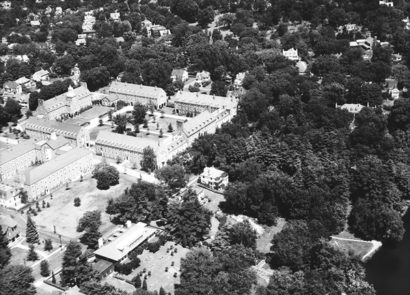 The story of the Neilsen begins with a college in need of a library and a steel magnate with the desire to fund one. Since its founding in 1871, the all-female Smith College had been utilizing the city library in Northampton, Massachusetts. As the needs of the student body outgrew the ability of the municipal library to accommodate them, the alumni association began fundraising efforts in earnest. In 1893, the association pledged and raised $20,000 for a library fund. Initially, a ’round room’ library space was set aside within the newly-built Seelye Hall, but plans quickly developed for a dedicated library in the heart of the campus.

By November 1909, the new college library had opened. It was a stately building, designed by architectural firm Lord & Hewlett of New York in Italian Renaissance Revival style, with a Mission-style interior. Judging from the eloquent letters written by Smith students describing the building, it is clear they were excited and a awed by their new reading, study, and research space. 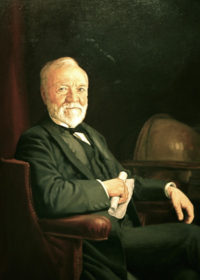 Half of the money to build the new library came from businessman Andrew Carnegie, with matching funds from Smith alumni and friends. Carnegie, who had immigrated to the United States from Scotland, is one of the wealthiest people in U.S. history. In his teens, he had been profoundly impacted by the generosity of a wealthy man who funded his local library. Carnegie was a frequent borrower and vowed to continue such a tradition, were he ever in a position to do so himself. He spent the later years of his life giving away almost all of his $350 million fortune (approximately $79 billion in 2015 dollars), helping to double the number of libraries in the United States. The Smith College Neilsen library was just one of the 1,681 public and private libraries built with assistance from Carnegie.

Since 1909, the Neilsen has been through numerous periods of expansion as the needs of students, faculty, and staff have changed. During additions in 1937, 1962, and 1978, space was added for book storage, along with offices, seminar rooms, a faculty lounge, and a chapel. Along the way, the library was given its formal name, the William Allan Neilson Library, after the college’s third president. In 1983, it was connected to the renovated Alumnae Gymnasium, after the gym had been adapted to hold a portion of the college’s expanding library resources. Today, the libraries at Smith include over 1.4 million items.

Just a few years ago, Smith College decided it was time for the library to be reimagined to better meet the needs of its students and faculty. Architect Maya Lin, known for her design of the Vietnam Veterans Memorial, was selected to design the new Neilsen building, and Shepley Bulfinch was chosen as a sustainability consultant. The renovation plan called for the additions to be demolished to make way for a new building that would retain only the façade of the original 1909 structure.

Groundbreaking for the project was in October 2017. By January 2018, temporary steel supports had been installed to brace the original façade as the interior floor plates and roof were removed. At this point in the renovation process, Longleaf Lumber was able to salvage several trailer loads of 6″ x 10″ x 24′ old-growth heart pine beams. The timbers, which were carefully removed from the building and loaded onto flatbed semi-trailers, are fine examples of dense, tight-grained longleaf pine. They are currently being resawn at our Berwick, Maine mill and will soon be sold as flooring, paneling, and other millwork.

We also enjoyed this webpage, which describes the new library in depth.

Top photo of the library is courtesy Rebecca Siegel.

Those interested in following the progress of the library construction can check out this webpage.