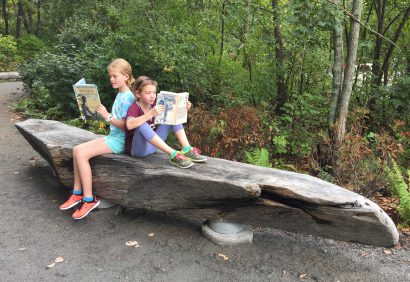 There’s a brand new visitor center at Walden Pond! The state reservation in Concord, Massachusetts began construction of this ambitious project in the spring of 2015, and a handful of the pond’s 700,000 annual visitors celebrated the grand re-opening this past September. The new building is universally accessible and includes exhibits, a bookstore, offices, meeting rooms, and public bathrooms. The newly landscaped grounds are home to massive wooden benches crafted from salvaged live oak shipbuilding timbers. 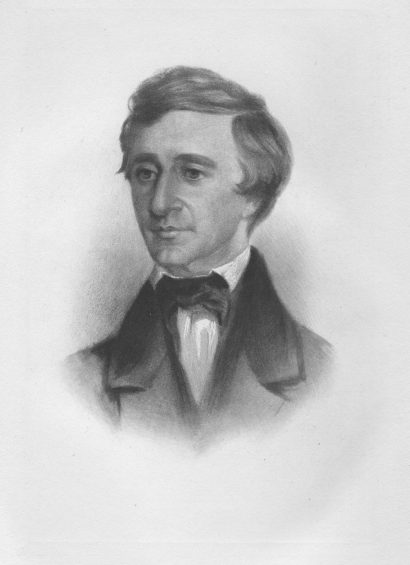 Believe it or not, Walden’s history has quite a bit to do with reclaimed wood! When Thoreau’s good friend (and pond owner), Ralph Waldo Emerson, gave him permission to live on the shores of Walden Pond in 1845, Thoreau got to pulling nails from reclaimed wood and building a small cabin. Several notable Concordians and friends, including Emerson, William Ellery Channing, and Bronson Alcott, helped Thoreau to raise the frame. Thoreau moved in on the fourth of July and stayed for two years, two months, and two days, penning his classic Walden during that time. The reclaimed wood cabin was sold and moved after Thoreau’s departure. The wooden structure was dismantled and repurposed once again in 1868.

Since then, millions of people have made the trip to historic Walden, many because of the connection that the 12,000-year-old kettlehole pond has to Henry David Thoreau and Walden. As a writer, Thoreau showed profound care for the environment, ecology, civil disobedience, and social justice. His writing has inspired many, including Mohandas Gandhi, Martin Luther King, Jr., and John Muir.

Over the years, Walden Pond has been logged, used for ice harvesting, and even played host to an amusement park (gone after a 1902 fire). Today, visitors enjoy a replica of Thoreau’s cabin, pond-side trails, a stocked trout fishery, and sandy beaches. Although the 335 acres immediately surrounding the pond are protected, the 2,000 acres beyond, known as Walden Woods, have been threatened by development. In 1990, the Walden Woods Project was founded to better protect this tract of Thoreau’s woods. The organization’s efforts continue today.

The renovated visitor center is a marvel of energy-efficiency. Much of the lighting is provided by ‘daylighting’, water is heated by the sun, sustainable materials are used throughout, and the building is super-insulated with highly efficient windows. Adjacent to the center is a solar parking canopy which provides electricity, shade, and raincover. 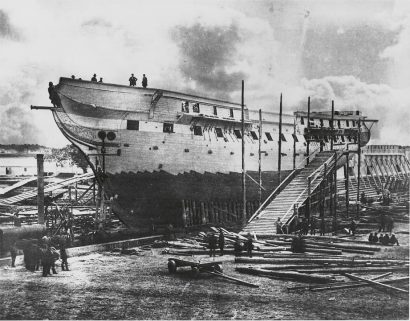 Longleaf Lumber was overjoyed to be able to provide 11 salvaged live oak timbers that line Walden Pond paths. These nearly 500-year-old pieces of wood were originally harvested from the southern United States as shipbuilding components for the U.S.S. Constitution and other vessels. We salvaged the pieces from filled-in holding ponds in Boston’s historic Charlestown Navy Yard. The timbers delivered to Walden Pond were notable for their size: between 13″x13″ and 17″x17″ in girth and from 11 to 20 feet in length. 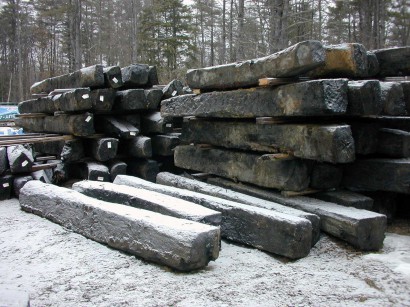 Settled carefully by forklift along the paths at the new center, these dense and rot-resistant benches will serve the visitors to Walden Pond for many, many years. We know Thoreau would be pleased, were he to visit today, to witness the conservation and reuse of resources happening at contemporary Walden.

A great many thoughtful people have been involved in this undertaking. Design services were provided by Maryann Thompson Architects (prime consultant and architect) as well as Michael Van Valkenburgh Associates, Inc. (landscape architect).

If you’re planning to make a trip to Walden Pond and the new visitor center, please visit the State Reservation’s website for park hours and regulations. The number of visitors is limited to no more than 1,000 people at a time, so calling ahead to confirm parking availability is always a good idea. Enjoy your visit and send us a selfie #onabench!